Who Are The Celts?

There are generally six Celtic peoples recognized in the world today. They divide into two groups, the Brythonic (or British) Celts, and the Gaelic Celts. The Brythonic Celts are the Welsh, Cornish and Bretons; the Gaels are the Irish, Scots and Manx (inhabitants of the Isle of Man). Some people recognize a seventh Celtic nation in the region of Galicia in Spain (their Celtic language died out a thousand years ago, and so the Celtic links are more tenuous).

Because of the great potato famine in Ireland in the 19th century, so many Irish migrated to the U.S. that they are by far the largest contingent of Celts in this country. Many people here mistakenly believe that Celtic means the same as Irish (this, of course, does not go down well with the rest of the Celts). The Scots form the next largest group of Celts in the U.S., with the Welsh trailing in numbers. How many Celts are there here? It's hard to say exactly, because of the number of part-Celtic Americans, but it is at least a quarter of the population.

The Celts are a musical, artistic people, with a love of words. They also love a good time, and hold many festivals around the country each year. On March 17, when the Irish pull out the stops to celebrate their day, perhaps the United States becomes the seventh Celtic country. We are surely the richer because of the Celts' presence here.

The history of the Celtic peoples goes back some thousands of years; at one time all of Europe was Celtic. The earliest European Celtic culture was in Hallstadt, Austria, and this was followed by the La Tene Celts in Switzerland. Over two thousand years ago England was ruled entirely by Celts; eventually the Romans, Jutes, Angles and Saxons came and pushed the Celts to the north and west. One of the great Celtic events of history was the fifth-century battle between King Arthur and his Celtic army against the dark pagan hordes in England (as the Celts termed the non-Celtic peoples); the Celts considered King Arthur's loss in that battle to be the death of civilization. King Arthur himself remains an important figure in Celtic legend; the original story is now much embroidered with medieval knights and traditions. 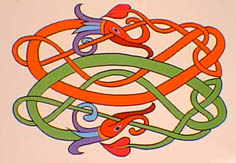 The ancient Celtic art was full of interlacing patterns, spirals, animal forms, and color. The early Celts displayed their art especially in metal: jewelry, weapons (they were fierce warriors), figurines and pots are some of the many artifacts that have come to light.

When Christianity came to the Celtic lands of Britain and Ireland, the monks of the seventh century adapted the ancient Celtic art forms to the new religion; the Celtic cross and tree-of-life designs, for example, came from this marriage. Writing also came to the Celts for the first time; the most famous manuscript by the monks is the beautiful Book of Kells, on display in the library of Trinity College in Dublin. (The historical Brian Boru harp is also on display in the same room.)

The harp has been the national instrument of all the Celtic peoples since the dawn of their history. In ancient times this would have been a primitive instrument, and the modern triangular harp did not appear in recognizable form in stone carvings until about the seventh century. The Celts have other instruments now, of course: bagpipes, whistles, flutes and drums among others.

Modern Celtic peoples have evolved symbols for themselves, and in North America people of Celtic descent often wear these symbols to show which group they are from. For instance, the commonest Irish symbol is the three-leaved shamrock, although the harp is often used as well. The Scottish symbol is a thistle, along with wearing of tartans. The Welsh flag is a red dragon on a green-and-white background; the Welsh consider the red dragon as their most Welsh symbol, but along with the dragon they recognize the leek and the daffodil.

The Celts are the most hospitable people you could hope to find anywhere. Are you of Celtic blood? Yes? No? It doesn't matter! Welcome, more welcomes and a hundred thousand welcomes! Have something to eat and drink, and we'll talk all night. Perhaps there will be music, singing and dancing. Whatever, have a good time and please come again.

We at The Harp and Dragon hope you will enjoy your stay with us as you peruse our many Celtic pages. You are very welcome indeed, and, of course, please do come again. Our welcome mat is always out.

There are over a hundred pages on this web site; click on the Return to Home Page link
to see an outline of this entire site.